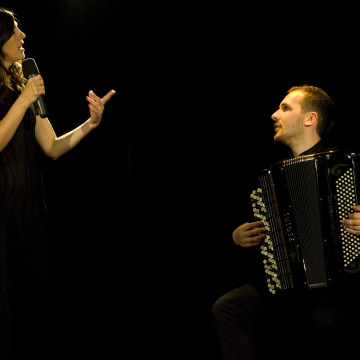 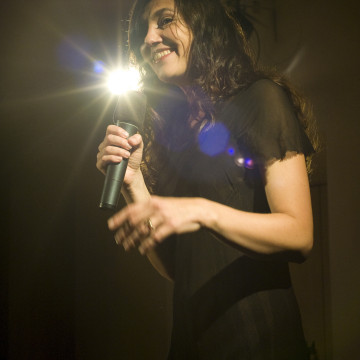 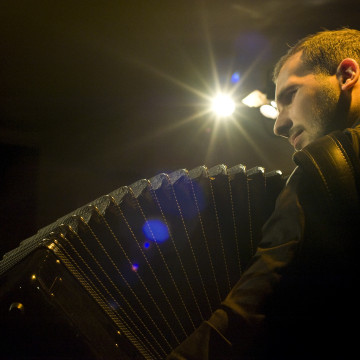 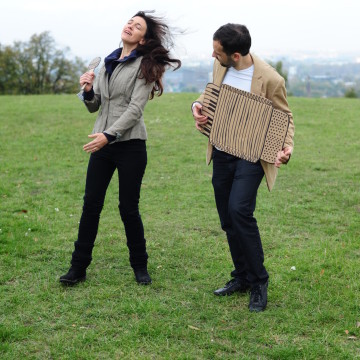 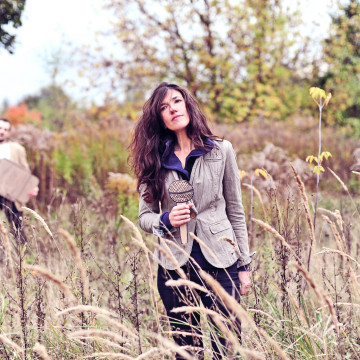 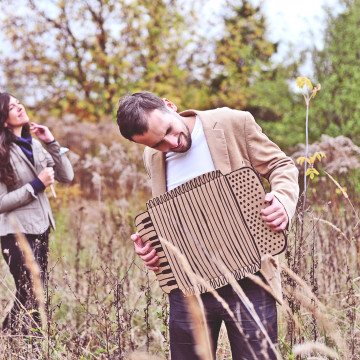 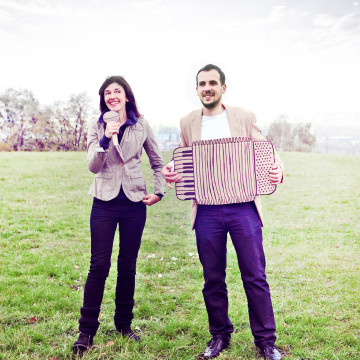 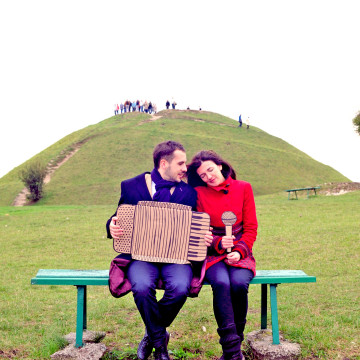 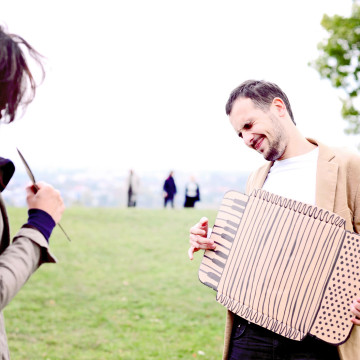 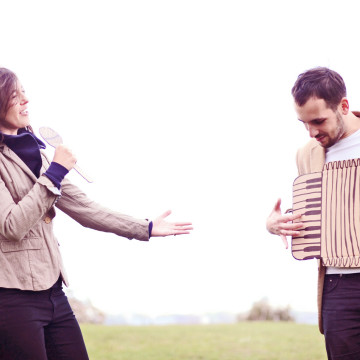 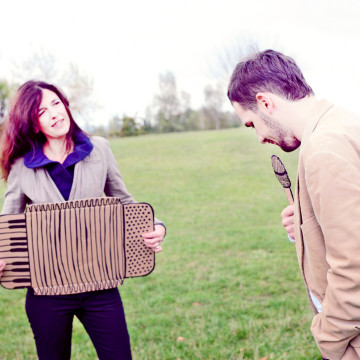 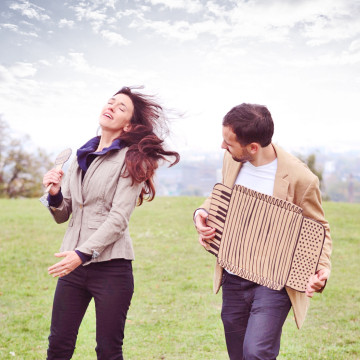 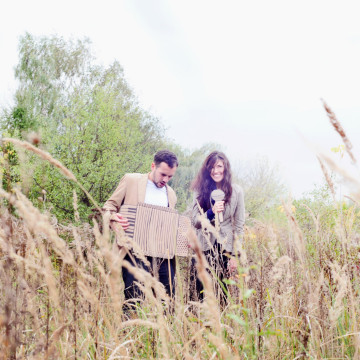 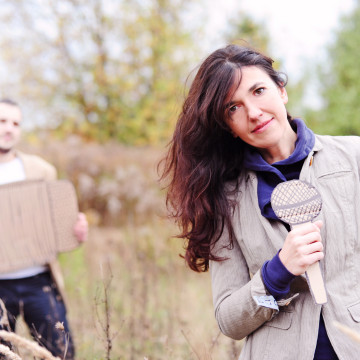 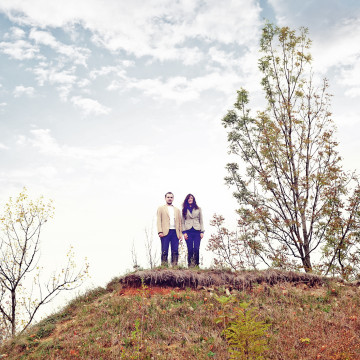 For several years I have had the pleasure to be in contact with the non-standard duo Quasi Una Fantasia. The ensemble consists of two talented artistic individuals: Bożena Boba-Dyga (vocals) and Maciej Zimka (accordion). Bożena Boba-Dyga is a multisensory artist because, in addition to music, she is also active in the fields of literature, visual […]

For several years I have had the pleasure to be in contact with the non-standard duo Quasi Una Fantasia. The ensemble consists of two talented artistic individuals: Bożena Boba-Dyga (vocals) and Maciej Zimka (accordion). Bożena Boba-Dyga is a multisensory artist because, in addition to music, she is also active in the fields of literature, visual art and theatre. In all these fields of art she is greatly successful and wins awards. Maciej Zimka is an ambitious and highly talented musician, who is also a multiple winner of instrumental and music composition competitions organised both in Poland and abroad. In addition, Maciej Zimka is an active and prosocial person who undertakes a lot of artistic activities. Each of the two artists is a great personality and this fact is no obstacle for the ensemble. On the contrary, it creates the ensemble’s unique style.

Quasi Una Fantasia creates its own unique music which is a pleasure to listen to. The listener’s response to the music is also influenced by the fact that the musicians do not create within the limits of only one style. Their music is a specific synthesis of the trends and music genres such as literary song, stage song, jazz, ethnic music, classical or contemporary music. Moods and emotions contained therein are justified not only at a compositional level but primarily on a plane of interpretation. You do not listen to Quasi Una Fantasia’s concerts, you experience them. Songs full of nostalgia, musing, reflection but also humorous, playful and funny compositions create a fascinating mix which you cannot tear yourself away from.

Therefore, I strongly recommend the ensemble Quasi Una Fantasia to all those who are interested in music. It is certain that their every concert will be a beautiful experience which will bring joy and shine into the lives of the recipients.

Here it is, “Quasi una fantasia “, an album with 17 songs, which is this very cake. I play this CD, having switched on the random play function – and listen to individual songs,  relying on the choice of the computer. I do not care about the order, just as I do not care about titles – I just let myself be carried away by a free stream of sounds, gestures, meanings and a soft voice.

This voice – profound in the low register, expressive in the middle, and piercing on top – unfolds a remarkable world before me. I know this world, I know the colour of the flowers, I can predict the weather, but every season of year, every month brings something new, something I have not known before. Mr ‘I-only-like-what-I-already-know’, inherent deep down inside me, feels comfortable because he already had the opportunity to get to know this world somewhere. But it turns out that it was in a dream, hence the different colours, different smells, completely different sounds. In a dream – so: was it for real?

In addition to the tempting voice _____, I am also embraced by the sound of the accordion. In this case it is not a wedding jig, they are not bouncy regions of tipsy merry-making. It is a transformer instrument, which – despite its small size – surrounds me embracing me with its  juicy tones and harmony which now and then escapes an attentive ear. I do not know how to shut this harmony in a rectangular space of a drawer labelled with a particular function – sometimes it willingly falls into the cabinet by itself and sometimes it slips free, gets away, swerves with a clever alteration, rises with progressions, and finally it soothes me with a triad (accompanied by a wink from an added seventh).

I listen to the words intently… Sometimes they lead me straight to the semantic destination, sometimes they stray with a paradox  or a mysterious ellipsis. Sometimes, the text disappears in expressive tones of the high register and then involuntarily my hearing follows what it managed to acquire through the years of education: here is the Bachian order in the autumnal mood of the minor key in the song entitled Karczma (in English: Tavern)… I have been sitting in this tavern for three hundred years and still I prick up my ears  to the sound of three hens (Syrokomle i Oroty). Life-giving pulse of the rhythm leads me in the song  Cudowne Maliki and the couplets Cestovani ; even Zapłakane oczy [in English: Tearful eyes]  enfold their charms by subtle streaks of bossa nova. Out of the blue, country style bangs on my ears, surprisingly in the songs Święta na koniec wieku  and Dzikie Noce. In some compositions, organ-like panoramic sound of the accordion gives way to dignified chorale-like accompanying sounds of the solemn piano – the piano calms me down in Przywilej piękna and makes me fall into reflection in Sviaty Vechir. While the piano is here a guest with good manners, the accordion is the host of many talents. It even has the ability to mimic quite mundane sounds, which thus gain more unusual character (an excellently imitated typewriter in List); somewhere else, on the other hand, the piano enfolds a more serious mood (Kaddish in Oświęcim). From time to time, the heart and mind are soothed by soft and static streaks of quiet chords (Mowa br. Alberta, choruses in Cestovani ), sometimes entering the level of a nostalgic ballade (Sama zguby nawarzyłam).

The variety of tracks is compensated for by their common style and sound, which is to the credit of the author of the arrangement. The arranger left enough space for improvisation letting the music flow spontaneously and surprisingly, which in this case is a great advantage as the musicians used this freedom with all responsibility, creating a unique atmosphere that is unfree from unconstrained and unpretentious virtuosity. At every moment of the album its  content intrigues, fascinates, invites to further listening and stimulates the senses.
So, if anyone still needs to be encouraged to get acquainted with the result of the ensemble’s work on Quasi una fantasia project, I hereby encourage you with great willingness!

Quasi una Fantasia is a debut album of a vocal and accordion duo. Bożena Boba-Dyga (vocals) and Maciej Zimka (accordion, piano) will introduce us to the world of sung poetry, although, in my opinion, a world of musical poetry would be a more matching term in this case. On the one hand, the images depicted […]

Quasi una Fantasia is a debut album of a vocal and accordion duo. Bożena Boba-Dyga (vocals) and Maciej Zimka (accordion, piano) will introduce us to the world of sung poetry, although, in my opinion, a world of musical poetry would be a more matching term in this case. On the one hand, the images depicted by the artists take us to the Galician ambience with the stifling but beautiful atmosphere of the proud city of Kraków, but  immediately after they show us with full firmness the openness and multiculturalism of our region from ancient times to the present day. On this album you can find beautiful folk themes, jazz variations, but also contemporary and sometimes improvised melodic and harmonic structures which in their diversity and sometimes even oppositeness become one coherent whole in this story thanks to their wonderful rendition by Bożena and Maciej.